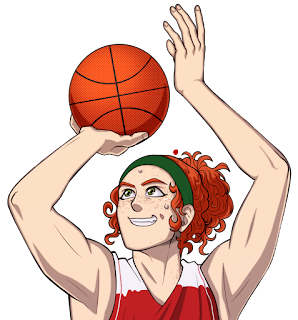 Last time I posted about Varsity was over two months ago, when I discussed the game's Break Moves and discussed the game's then-soon Kickstarter release date. At the time, I had lofty goals for the game's art design, direction, and release. I was in talks with a publisher, and was feeling over the moon about the game's release. In the time since that post, a lot has happened in my life—good and bad—which has made me realize that this sort of grandiose planning is better saved for projects in the future.

I'm a young adult, a fresh college graduate who's just started a new job, and I don't have the expendable capital or connections to do everything with Varsity that I would like to do at the moment. In particular, I worry that a failed Kickstarter for the game would discourage me from trying something like this again in the future.

That said, I am still very passionate about Varsity and its mechanics. Besides, the game is finished! It's been heavily play tested, stress tested, and troubleshot, and it's already fully presentable and playable. After a lot of contemplation, I've decided that it's better to release it now (without the full art, extra playbooks, etc. that I planned for the Kickstarter release) than to leave the documents to rest in my personal files. That's why I've decided to release Varsity on itch.io later today (5 June 2021, 2:00 pm EST) and on DrivethruRPG as soon as it's approved to go public. In both cases, I'll let you pay what you want for the game.

The download will include 'Varsity v1.0,' the first full release of the game, as well as two downloadable cheat sheets (one for the players and one for the referee) full of all of the references and moves needed to speed up game play, and one printer friendly document full of blank landscape layouts for each of the playbooks.

Any amount of support for the game would be very much appreciated. I don't have the time and resources to work on rpg design fulltime, but it is really a true passion of mine, and I have several other projects that I am excited to work on in the coming days. If you want to support my endeavors, please grab the game and leave however much you feel is appropriate. If I notice interest and support for the game, I would love to do a Kickstarter for a Varsity v2.0 someday. But in the meantime, I think the game is pretty damn fun and I want to give you all a chance to play it!

I am excited to get back into the swing of posting on this blog, both about new projects and general musings about rpg design as a whole. For now though, I'm excited to see you all on release day. Cheers!

UPDATE: Varsity is now live on itch.io! If you want to support the game and its developer, pop over and pick up a copy!

Popular posts from this blog

Baseball in Dungeons and Dragons? — Trying Something Weird in D&D

February 27, 2021
(Naoni, our cursed wood elf ranger, donning his baseball uniform for the first time. Art by his player, lycanthroopy on twitter ) A while ago I posted a handout on twitter for a new 5th edition campaign I was starting called Dungeons x Dragons . The campaign's premise follows a group of novice adventurers as they enter the dangerous Adventurer's Exam alongside nearly 600 other applicants. At the end of the exam, less than ten applicants will pass and get their "Adventurer's License," a document which certifies them as an elite Pro Adventurer. The whole concept is heavily inspired by Hunter x Hunter, a manga that is a big favorite among myself and most of the players.  Having just survived a grueling week on Bumbo Island, an Australasian remote island where every living organism on the island is at least a Challenge Rating 3, the party of player characters earned their way into the Third Phase of the Adventurer's Exam. It was time for a big change of pace... I
1 comment
Read more

February 26, 2021
Early this year I announced Varsity, my sports anime inspired Powered by the Apocalypse game.  Outside of a teaser image for the game beautifully created by @IdleCharles on Twitter, I haven't actually teased too much about what makes the game unique. In this article, I want to go a little into what makes Varsity tick, and what I have done to capture everything I love about the sports anime genre. Core Mechanics Varisty is a Powered by the Apocalypse game, and follows a lot of the most fundamental traditions of the system. It's a "story game," and prioritizes the collaborative storytelling element of tabletop games. It uses two d6s as its only dice and considers a roll of 6 or lower as a failure, 7-9 as a partial success, and 10+ as a success. Also, the GM (or "Referee") doesn't roll any dice.  Every moment in the life of your player character—known in Varsity as your "Ace"—revolves around the big Game. Whether you are a modern day high scho
Post a Comment
Read more

March 21, 2021
Last time, I talked about the playable classes in Varsity, including the popular tropes I emulated when designing them. This week, I'm talking about downtime in the game. While the sports games themselves are obviously the crux of a sports anime game, making up the biggest climaxes and driving most of the narrative arcs in the story. Break time, however, can be just as important—exploring the characters outside of their roles in their team, giving them the space they need to breathe, introducing and interacting with outside characters like family and friends, and showing the ramifications of what happened in a match. I'll first go over the general definition of "Break Time," mechanically and in universe. Then I'll break down each of the moves that you can use during a Break! A Break is considered any time that you aren't in a sports match in-universe. In other words, any time the sports clock isn't counting down is Break time. This includes the smallest
Post a Comment
Read more