Last time, we developed the first three regions of our Dark Souls/Shadow of the Colossus/Breath of the Wild inspired "Cursed Kingdom" campaign setting, using the basic land types of Magic the Gathering as inspiration. Before I go on, I want to compile some of the lore and mechanics that I've written up for this campaign idea so that you can embark on the same journey as me in this strange, FromSoftware-inspired realm.

If your character is named Albero, Euphemia, or Myoki, turn back now! Otherwise, let's dive into the world of the Cursed Kingdom.

Here is the campaign's central conceit, as I see it: the players come from an outside world where magic and its affects are rarely seen. The long-abandoned "Cursed Kingdom," its true name long forgotten to most of the outside world, is said to be the last bastion of magical knowledge in the world. In the world of our character's backgrounds, the highest "level" that even the most potent and legendary of NPCs have attained is level 5. Our characters will be starting at level 1.

People (including the player characters) seek its rumored powers including all-curing panaceas, high-level items, ancient mysteries, and even the secrets of immortality. These rumors are hard to confirm as very, very few who enter the Kingdom's mountain pass ever return. Nonetheless, the truly desperate are willing to risk everything for the chance that these tales are true. 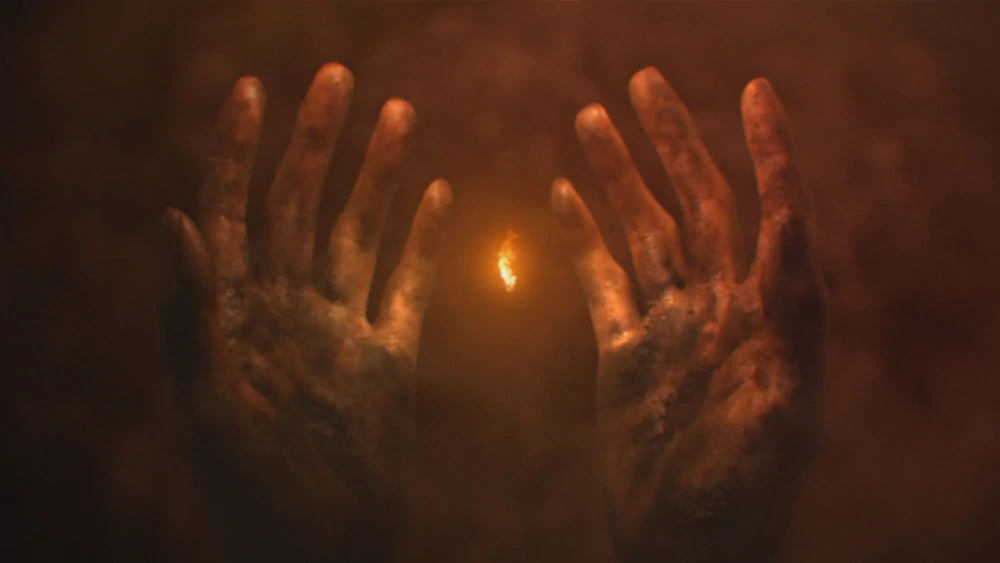 The Basics
This campaign is my return to D&D after a long hiatus playing other games. While I'm using the system, I want to squeeze the most out of it that I can, so I'm going to try and modify the actual mechanics as little as I can.

The campaign's biggest (and first-revealed) secret is that, once the players cross the magical lace barrier to enter the kingdom itself, XP becomes a tangible force in the world. Enemies drop physical balls of experience, and the players can divide XP between themselves diegetically—physically, in-universe, in-character. When a character dies, another character can use the dead character's dropped ball of XP to restore that character to life at the end of a short rest at the cost of 25% of that character's XP, rounded up.

Gold is not a currency within the Kingdom. Instead, the characters trade XP one-to-one as gold at the same rate. If a character loses more XP than they needed for their level, they don't revert down a level, it just increases the amount of XP they have to gain before they can level up in the future.

Lets make things more interesting, though: if a living character's XP is lower than their level requirement for a long enough time, they slowly become an emotionless husk that simply carries out the routines it had before—something like the hollows in Dark Souls. To keep the game from being too punitive, the timeframe can be something like a month or two, and there can be clear physical signs of its onset... maybe a slow bleaching of the skin and hair. This is mostly something that will affect non-player characters: we can use for some of the tragic characters our players will be fighting throughout the campaign.

Lets push things even farther: if a player absorbs an amount of XP from a single source that is more than twice their current total XP, their body is taken over by the mind of the character whose XP they absorbed. To cure this, the other players will have to kill the dominated player and absorb out the mind-controlling XP until the proportions are at a safe amount. This could be a rule that could lead to some interesting decisions from our players, but again it is mostly something that we can really play with when we get to putting lore to these mechanics. Also, as a safety net for low-level players, we can say that creatures with less than 200 total XP are too weak to dominate the minds of those who absorb them.

To recap: XP is currency. XP keeps our characters alive. XP can be divvied up between multiple people. Lose too much XP, and you'll eventually become a shell of your former self. Gain too much XP from one character, and you'll be dominated by that character.

If this all sounds too complicated, we'll have to make sure that we trickle it out to the players and always remind them of the rules when they're relevant until it seems like everyone has gotten it. And never forget our most important tool in helping players remember the mechanics... Tying them to: “Each fool who crosses through the mountain Lace /  shall join the kingdom in its cursed fate”
When a creature dies beyond the Lace, a manifestation of its spiritual energy slips out in the form of a luminous Heart. A Heart is dormant for a time, during which it can be absorbed by another creature to increase the power of its own Heart. If a Heart is without a body for long enough, it can become mobile and even seek out a new vessel to possess.
When a creature absorbs a Heart, its natural aptitude increases proportionally to the size of the Heart. In poetic terms, absorbing a Heart feels like receiving a great wave of inspiration that seems to untangle one's thoughts and make connections clear that were previously obscured. If the absorbing creature is naturally intelligent, it may suddenly begin to understand more of the secrets of the universe. If it is naturally strong, its vigor may seem to increase as it surpasses its previous physical limits. The more one’s own Heart grows, however, the more and larger Hearts it must consume to continue to feel this progress.
A creature can exert some mental control over its own Heart, or over a Heart that it is holding in its hands. With a little practice, any creature can will a piece of its Heart out of its body, or divide a Heart it is holding into smaller pieces. With much practice, a creature can purify a Heart of its previous vessel’s influence or exorcise pieces of a Heart from a resisting host.
Hearts range from dim to blindingly bright and vary greatly in color depending on their most recent vessel. The smallest unit to which a Heart can be divided is called a Lumo. An individual Lumo is an orb of light about 3 cm in circumference that—though floating—seems to impress about a gram of weight below itself.
The size of one’s Heart is a critical concern in the Cursed Kingdom. As such, trade is conducted directly with pieces of Hearts. These Lumos, as they are known across the Kingdom, are worth far more than any gold or riches.
An average person in the outside world has between 10 and 25 Lumos, while a legendarily skilled individual outside of the Lace may accrue as many as 3,000 in their prime. The curse of the Lace allows those within the Kingdom to far surpass the natural limits of those outside.
When a player is about to gain a large amount of Lumos, compare their current Lumos to the amount they are absorbing. If the Lumos are first cleansed by a purification rite, ignore the following steps.  Creatures whose Hearts contain less than 200 Lumos do not possess the strength of will to pass on traits or to dominate minds through their Heart. Otherwise, if the new amount of Lumos gained is greater than twice their current Lumos, the player character’s mind is dominated by the previous vessel. This process is called Heartdrunkeness, and one may become Heartdrunk from consuming one massive Heart or too many similar Hearts.
The only way to reverse this domination is through a Lumo Exorcism. An exorcist targets and removes the specific Lumos that corrupted the current host and takes them (or a part of them, lowering the percent below 200) into themself.

When a creature dies, their Heart can be restored to their body over the course of a simple ritual that can be performed over the course of a short or long rest. At the end of the rest, the creature is restored to life as if targeted by the spell Resurrection, but one fourth (25%) of its current Lumos are lost as they ephemerally slip away into the surrounding area.
If a creature's Lumos fall below the amount needed to sustain their current potential—specifically, the amount that was required to reach their current level—they begin the slow, bleaching process of becoming Void. To reverse this process, one must regain the necessary amount of Lumos.

A great gate locks away the upper levels of the castle within the city in the heart of the Kingdom. The castle is said to hold the Kingdom's greatest secrets—including the way out of the Kingdom itself. To pass through the great gate, one must present a Heart of at least 50,000 Lumos. Thus, the goal of the first part of the campaign is for each character to reach level 9.

Now that we've fleshed out the in-universe explanations of these mechanics, lets look at some of the cool ways we can apply them to NPCs in the world:

That's all I have time for today, but I think that this was a very productive article. If you have any thoughts or comments, I'd love to hear them. Any feedback would be a great indication that these articles aren't falling on deaf ears. Otherwise, I hope I catch you next time!

Popular posts from this blog

Baseball in Dungeons and Dragons? — Trying Something Weird in D&D

February 27, 2021
(Naoni, our cursed wood elf ranger, donning his baseball uniform for the first time. Art by his player, lycanthroopy on twitter ) A while ago I posted a handout on twitter for a new 5th edition campaign I was starting called Dungeons x Dragons . The campaign's premise follows a group of novice adventurers as they enter the dangerous Adventurer's Exam alongside nearly 600 other applicants. At the end of the exam, less than ten applicants will pass and get their "Adventurer's License," a document which certifies them as an elite Pro Adventurer. The whole concept is heavily inspired by Hunter x Hunter, a manga that is a big favorite among myself and most of the players.  Having just survived a grueling week on Bumbo Island, an Australasian remote island where every living organism on the island is at least a Challenge Rating 3, the party of player characters earned their way into the Third Phase of the Adventurer's Exam. It was time for a big change of pace... I
3 comments
Read more

March 15, 2022
A campaign idea that I’ve been perfecting for years since I first ran a few sessions of it, simply titled Cursed Kingdom , is finally going to see the light of day again and I couldn’t be more excited. The campaign’s premise involves a group of adventurers, each from a different kingdom from around the world (which the players created in as much detail as they wanted while making their characters) traveling to a secluded, ancient kingdom in search of its secrets. Rumors say that the kingdom holds whatever someone could want: panacea, supreme power, great wealth, immortality. The first time I ran the campaign, I flew mostly by the seat of my pants as I created the legendary kingdom piece by piece for each session. As our first session of the new campaign is this week, it looks like I will be doing that again to some degree. However, in this setting, the Cursed Kingdom is as much of a character as the players. Because of that, I want to get a good idea for at least what each of the reg
Post a Comment
Read more